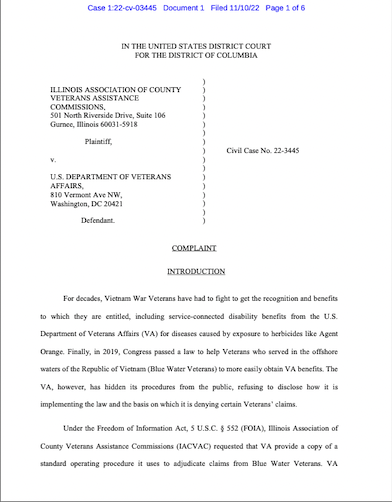 WASHINGTON—Today, the Illinois Association of County Veterans Assistance Commissions (IACVAC) filed a complaint in federal court seeking access under the Freedom of Information Act (FOIA) for Blue Water Veteran documents the Department of Veterans Affairs (VA) has refused to turn over.  The lawsuit was filed with the pro bono assistance of the National Veterans Legal Services Program (NVLSP).

The IACVAC and NVLSP filed a complaint in federal court seeking access to these documents, which detail a hidden procedure by the VA to adjudicate claims by Veterans who served in the offshore waters of the Republic of Vietnam between January 9, 1962, and May 7, 1975. These veterans are known as Blue Water Veterans.

For decades, Vietnam War Veterans have had to fight to get the recognition and benefits to which they are entitled, including service-connected disability benefits from the VA for diseases caused by exposure to herbicides like Agent Orange. In 2019 Congress passed a law to help Veterans who served in the offshore waters of the Republic of Vietnam, known as Blue Water Veterans, to more easily obtain VA benefits.

The VA has hidden its procedures from the public, refusing to fully disclose how it is implementing the law and the basis on which it is denying certain Veterans’ claims.

“Veterans, their advocates, and the public deserve to know how VA is treating Blue Water Veterans and how the agency decides their claims,” said Andrew Tangen, President of IACVAC. “VA is supposed to work with representatives of claimants in an equal partnership to serve Veterans and their families.  It shouldn’t take a lawsuit to know how VA is adjudicating these claims.”

Troublingly, and contrary to VA’s own Congressional testimony in 2019, Veterans represented by members of IACVAC have had their claims denied by VA through a tool VA created to review the deck logs of US Naval vessels, with no further development.

To shed light on how VA is processing claims and why it is denying certain claims, IACVAC filed a FOIA request to VA seeking a copy of its “Blue Water Navy Standard Operating Procedure” referenced in VA’s Adjudication Procedures Manual.  VA denied the request.  IACVAC therefore filed this lawsuit to compel VA to produce its secretive procedure.

“Almost 50 years after the end of the Vietnam War, veterans of that era are still fighting to get the recognition and benefits they deserve,” said Renee Burbank, Director of Litigation at NVLSP. “Blue Water Veterans deserve to know how VA handles their claims, so Veterans and their advocates—including organizations like IACVAC and NVLSP—can ensure they get the VA benefits they have earned.”

About NVLSP
The National Veterans Legal Services Program (NVLSP) is an independent, nonprofit veterans service organization that has served active duty military personnel and veterans since 1981. NVLSP strives to ensure that our nation honors its commitment to its 22 million veterans and active duty personnel by ensuring they have the benefits they have earned through their service to our country. NVLSP has represented veterans in lawsuits that compelled enforcement of the law where the VA or other military services denied benefits to veterans in violation of the law.  NVLSP’s success in these lawsuits has resulted in more than $5.2 billion dollars being awarded in disability, death and medical benefits to hundreds of thousands of veterans and their survivors. NVLSP offers training for attorneys and other advocates; connects veterans and active duty personnel with pro bono legal help when seeking disability benefits; publishes the nation's definitive guide on veteran benefits; and represents and litigates for veterans and their families before the VA, military discharge review agencies and federal courts. For more information go to www.nvlsp.org.