WASHINGTON—The National Veterans Legal Services Program (NVLSP) and Burn Pits 360 released their white paper, “Five Decades of VA Service Connection Presumptions,” which confirms that positive statistical association, not causation, is the predominant standard for establishing service connection presumptions. This Report analyzes almost fifty years of presumptions created by statute or regulation and finds that Congress and the U.S. Department of Veterans Affairs (VA) have historically decided whether a disease merits a presumption of service connection through the use of a “statistical association” test, rather than a more demanding causation or etiological standard. The Report also concludes that VA is currently using the higher causation standard, rather than the historical standard, in determining whether to grant presumptions of service connection for diseases due to exposure to toxic chemicals spewed by burn pits on military bases in Southwest Asia.  The white paper was prepared with the pro bono assistance of Hunton Andrews Kurth LLP.

“This Report provides overwhelming evidence that to be consistent with the practice the government has historically used for paying benefits to disabled veterans, the VA should be determining whether diseases veterans are suffering from after exposure to toxins from burn pits deserve presumptive service connection through application of a statistical association test,” said NVLSP Special Counsel and Co-Founder Bart Stichman.  “The VA’s recent use of a more demanding, causation standard wrongly discriminates against those who risked their lives in wartime service in Southwest Asia.   Veterans and servicemembers suffering from the catastrophic effects of burn pit exposure have already been waiting too long for recognition of their illnesses.”

“By any measure, five decades of proof should be sufficient for the VA to do the right thing by veterans who bravely served their country and were exposed to these toxic burn pits.  Today, these veterans are plagued with a host of illnesses and many are dying from their toxic exposure, and the VA is burdening them unnecessarily with a standard of proof of a connection to exposure that is completely unmerited,” said Rosie Torres, Co-Founder of Burn Pits 360. “The VA needs to stop delaying and denying critical coverage to our veterans.  Instead of disabled veterans spending their precious time with their families, they are forced to spend it fighting the VA for benefits that are being wrongfully denied. This is no way to treat our veterans.”

The findings of this Report are particularly timely as the U.S. Senate is poised to vote soon on the Honoring our Promise to Address Comprehensive Toxics Act of 2021 (Honoring our PACT Act). The Honoring Our PACT Act has already been passed by the House of Representatives and would require VA to presume service connection for many diseases due to their association with toxic exposures, including burn pits.

In October 2021, NVLSP launched its Burn Pits Claims Assistance Program (Burn Pits CAP). This Program marks a major expansion of the free legal representation that NVLSP has provided to veterans and their survivors over the last 40 years.  The Burn Pits CAP assists veterans exposed to toxic emissions from burn pits while serving overseas by representing them on claims for disability benefits before the U.S. Department of Veterans Affairs (VA).  You can learn more about NVLSP’s Burn Pits CAP program, here.


About NVLSP
The National Veterans Legal Services Program (NVLSP) is an independent, nonprofit veterans service organization that has served active duty military personnel and veterans since 1981. NVLSP strives to ensure that our nation honors its commitment to its 22 million veterans and active duty personnel by ensuring they have the benefits they have earned through their service to our country. NVLSP has represented veterans in lawsuits that compelled enforcement of the law where the VA or other military services denied benefits to veterans in violation of the law.  NVLSP’s success in these lawsuits has resulted in more than $5.2 billion dollars being awarded in disability, death and medical benefits to hundreds of thousands of veterans and their survivors. NVLSP offers training for attorneys and other advocates; connects veterans and active duty personnel with pro bono legal help when seeking disability benefits; publishes the nation's definitive guide on veteran benefits; and represents and litigates for veterans and their families before the VA, military discharge review agencies and federal courts. For more information, go to www.nvlsp.org.

About Burn Pits 360
Burn Pits 360 is a 501(c)(3) non-profit veterans organization located in Robstown, Texas. Our mission is to advocate for veterans, active duty service members, and families affected by deployment-related toxic exposures through research, education, outreach and advocacy. 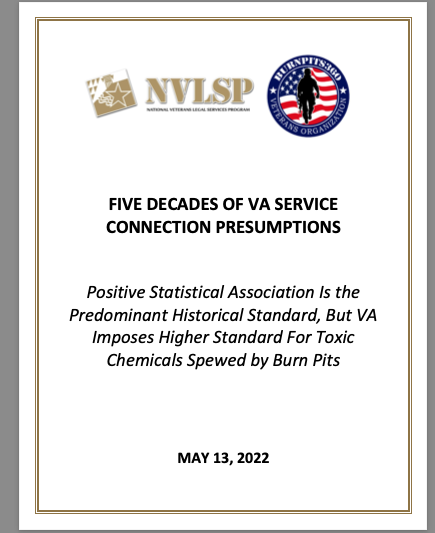