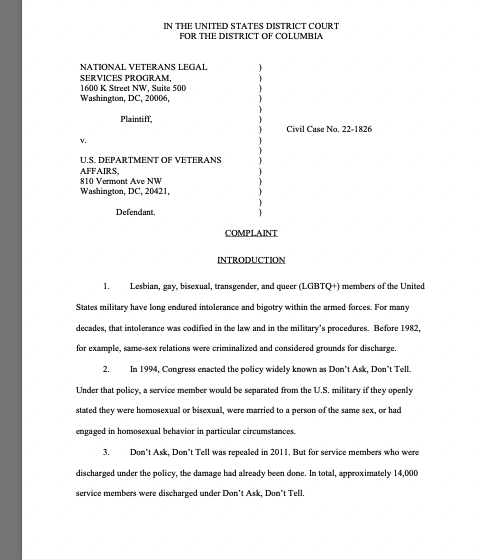 Washington—Today, the National Veterans Legal Services Program (NVLSP) filed a complaint in federal court, seeking access under the Freedom of Information Act (FOIA) to a recently issued Department of Veterans Affairs (VA) guidance that the VA has not made public. The guidance, which the VA announced in September 2021, provides instruction to VA claims adjudicators in reviewing benefits claims for servicemembers discharged under the anti-LGBTQ+ policy known as “Don’t Ask, Don’t Tell,” or for their gender identity or HIV status.

The VA announced the guidance on September 10, 2021, the ten-year anniversary of the repeal of Don’t Ask, Don’t Tell in a blog post. The blog touts the VA’s commitment towards meeting LGBTQ+ veterans’ needs and gives a general description of the new guidance, but the VA did not release the text of the guidance itself.

There are approximately one million lesbian, gay, bisexual and transgender veterans in the United States. An estimated 100,000 servicemembers have been discharged for their sexuality, and Under Don’t Ask, Don’t Tell, thousands of servicemembers who served our country proudly—decorated heroes and exceptional servicemembers among them—had their military service cut short with a less than honorable discharge characterization. In part because of these less than honorable discharges, LGBTQ+ veterans face higher risks of economic insecurity, mental health concerns, and housing instability. The VA benefits they were promised are vital to ensure veterans, regardless of their sexuality, have access to the benefits they earned.

A less than honorable discharge, however, bars a veteran from many VA and military benefits, such as education benefits, health care, home loans, pensions, and disability compensation. In certain circumstances, the VA will provide some benefits to such veterans, and it evaluates their benefits applications through a character of discharge determination. According to the VA’s September 2021 announcement, its guidance provided direction on these determinations.

This Pride month and every month, NVLSP seeks to help these veterans gain access to the benefits owed to them for their honorable service to this county. If you or someone you know was discharged under DADT or based upon their sexuality, NVLSP encourages you to apply for legal help from our pro bono program Lawyers Serving Warriors®.

For more information about how veterans with less-than-honorable discharges are excluded from VA benefits, see the 2016 report issued by NVLSP and Swords to Plowshares prepared by the Veterans Legal Clinic at the Legal Services Center of Harvard Law School, Underserved: How the VA Wrongfully Excludes Veterans with Bad Paper.

About NVLSP
The National Veterans Legal Services Program (NVLSP) is an independent, nonprofit veterans service organization that has served active duty military personnel and veterans since 1981. NVLSP strives to ensure that our nation honors its commitment to its 22 million veterans and active duty personnel by ensuring they have the benefits they have earned through their service to our country. NVLSP has represented veterans in lawsuits that compelled enforcement of the law where the VA or other military services denied benefits to veterans in violation of the law.  NVLSP’s success in these lawsuits has resulted in more than $5.2 billion dollars being awarded in disability, death and medical benefits to hundreds of thousands of veterans and their survivors. NVLSP offers training for attorneys and other advocates; connects veterans and active duty personnel with pro bono legal help when seeking disability benefits; publishes the nation's definitive guide on veteran benefits; and represents and litigates for veterans and their families before the VA, military discharge review agencies and federal courts. For more information go to www.nvlsp.org.
Media contact:
For NVLSP: Patty Briotta, office 202-621-5698, patty@nvlsp.org.