WASHINGTON – Today, Swords to Plowshares and the National Veterans Legal Services Program (NVLSP) called on Department of Veterans Affairs (VA) to do away with its unlawful eligibility rules that fail to honor and protect those who were unjustly separated from the military with a less-than-honorable discharge. In a joint response to VA’s Proposed Rule to Update and Clarify Regulatory Bars to Benefits on Character of Discharge (COD) determinations, the organizations detail their demand for a VA benefits system that – unlike the current system – would account for racial discrimination, combat deployment, military sexual trauma, and arbitrary distinctions like branch and era of service – all factors which significantly increase a service member’s chance of receiving a less-than-honorable discharge. VA’s proposed regulations are in direct response to Swords and NVLSP’s petition for rulemaking submitted in December 2015. Nearly five years later, the VA responded with its new proposed regulation which, if implemented, would continue to exclude veterans most in need of treatment and support.  The comments were filed with the pro bono assistance of Latham & Watkins LLP and the Veterans Legal Clinic at the Legal Services Center of Harvard Law School.

Based on decades of work with veterans, both groups attest to the devastating impact less-than-honorable discharges and the currently flawed VA system has on veterans. Swords to Plowshares and NVLSP contend that parts of the proposed rule are unlawful, arbitrary, and capricious, and they also prevent VA from fulfilling its mission to care for those who have borne the battle. The VA’s proposed COD regulation continues to fall far short of Congress’s original intent in the 1944 G.I. Bill.

“The World War II Era Congress expressly chose an expanded eligibility standard under which nearly all former service members would be granted benefits to rehabilitate and reintegrate into civilian life,” said Mo Siedor, Legal Director at Swords to Plowshares. “Congress explicitly said that it was not limiting access only to those with Honorable discharges, but rather wanted to give veterans with less-than-honorable discharges ‘the benefit of the doubt’ and offer them the support and care they needed.”

Swords to Plowshares and NVLSP earlier released a report, Underserved, that canvassed the legislative history of the 1944 G.I. Bill and its expanded eligibility standard. As stated in that report, Congress chose the “other than dishonorable” eligibility standard so that former service members would be excluded only on the basis of severe misconduct that should have led to Dishonorable discharge. In making the eligibility determination, Congress also wanted mitigating circumstances and positive factors, such as combat service or a service-related mental health condition, to be taken into consideration.

Yet today, instead of giving veterans “the benefit of the doubt”, the VA compounds the burden for veterans who have been less-than-honorably discharged with a presumption of ineligibility. The proposed rules would permit a veteran to be barred from benefits for very minor misconduct, such as showing up late to work twice in a two-year period – far from the standard of a Dishonorable Discharge that Congress intended. Swords To Plowshares’ Managing Attorney Amy Rose shared, “The vast majority of our clients seeking benefits from the VA with a less than honorable discharge have a service-related condition – like PTSD or Traumatic Brain Injury – from either combat deployments or surviving a sexual assault in service. They become symptomatic and are kicked out of the military instead of receiving the help they need. When they try to get care from the VA, again they’re refused help. It’s unconscionable.”

Unfortunately, while these veterans might be most in need of support from the VA, they are also most unlikely to be able to access the agency’s services due to VA’s overly restrictive regulations. Veterans with less-than-honorable discharges are also more likely to suffer from homelessness, mental health conditions, and unemployment. They have three times the risk of suicidal ideation, and have higher rates of incarceration. Veterans of color have significantly higher rates of involvement with the military criminal justice system, greatly increasing their chances of having a discharge status that precludes them from VA benefits.

“To be true to its mission of caring for those who have borne the battle and to Congress’s intent, the VA should operate from a presumption of eligibility  and ‘benefit of the doubt’ when it comes to our veterans with less-than-honorable discharges,” said Bart Stichman, Executive Director of the National Veterans Legal Services Program.  “The VA should recognize that how it deals veterans with less-than-honorable discharges will have a huge impact on its success trying to remedy the issues of veteran suicide and homelessness.”

“Overall, VA must establish regulatory bars that properly interpret the text of the governing statute accord with the statutory scheme and honor Congress’ intent,” stated Dana Montalto of the Veterans Legal Clinic at the Legal Services Center of Harvard Law School. “A faithful regulatory interpretation would result in bars that exclude only those former service members who committed severe unmitigated misconduct that should have led—but for a technical or procedural reason did not lead—to a Dishonorable Discharge. The proposed rule does not do that and therefore further changes are needed.”

“Decades of experience with the existing regulatory bars clearly show that the character of discharge rule is fundamentally flawed and that major revision is needed to bring it into line with statute, enable a workable administrative system, and get help to veterans who need it,” said Mo Siedor, Swords to Plowshares’ Legal Director.

Swords to Plowshares and NVLSP pressed VA to take a more holistic approach to determining the service members that it excludes from basic veterans benefits. In response to VA’s proposed framework, the groups put forth several recommendations for improvement as well as recommended regulatory language.

• 38 C.F.R. §3.12(d)(3) – Moral Turpitude - The VA seeks to exclude veterans for offenses involving moral turpitude but it provides a vague and overbroad definition that will result in inconsistent and unjust outcomes for veterans. The proposal defines moral turpitude as: “a willful act committed without justification or legal excuse which gravely violates accepted moral standards and . . . would be expected to cause harm or loss to person or property.” The VA’s proposed definition does not consider the veteran’s state of mind at the time of the offense - a key element to any crime of moral turpitude.  In addition, it allows an adjudicator to use their own moral judgement instead of creating a uniform, consistent rule to be applied fairly across the country. To create a fair, easily applied rule, Swords to Plowshares and NVLSP recommend replacing this bar with a specific list of serious offenses that, if the service member was convicted, would result in a bar to benefits.

• 38 C.F.R. §3.12(d)(4) – Willful and Persistent Misconduct – Under the current system, the majority of CODs are denied on this basis. In its proposed regulations, VA provide further clarity on what constitutes “willful and persistent” misconduct – it would require only two incidents of minor misconduct within a two year period, one incident of minor misconduct within two years of an incident of serious misconduct, or two incidents of serious misconduct within five years. It misappropriates definitions of minor and serious misconduct from the DOD’s Manual of Courts Martial, and it defines persistent as “more than one time”. If this rule is finalized, we expect veterans will continue to be denied eligibility using this overbroad standard that goes well beyond Congress’s intent to exclude only those with Dishonorable discharges. Swords to Plowshares and NVLSP recommend eliminating this bar because it exceeds Congress’s grant of authority to VA.  The “willful and persistent misconduct” bar conflicts with the governing statute by assigning a “dishonorable” label to minor misconduct for which service members never would have been and for which they were not “dishonorably” discharged.

• 38 C.F.R. §3.12(e) – Compelling Circumstance & Mitigating Factor – Under the current regulations, there is no provision permitting or requiring consideration of mitigating factors.  VA’s proposed rule adds such a provision through a “compelling circumstances” exception for the regulatory bars of “moral turpitude,” “willful and persistent misconduct,” and “sexual acts involving aggravating circumstance or other factors affecting the performance of duty,” but not “discharge in lieu of trial” or “mutiny or espionage.”  We strongly support the creation of “compelling circumstances” consideration and appreciate the breadth of factors that VA proposes to include.  Indeed, we believe the consideration of positive and mitigating factors to be required by statute because it is inherent in the concept of “dishonorable” – a term of art in military law.  However, we wish to point out six ways in which VA’s proposed rule is too narrow or otherwise will fail to live up to its intended purpose.
• Framing the mitigating factors as an “exception” infers that service members can access benefits only if they have an excuse for their behavior.
• VA proposes to exclude service members discharged after accepting an Other Than Honorable (OTH) discharge in lieu of trial by general court-martial from “compelling circumstances” consideration.
• Many of the listed compelling circumstances (e.g. “judgmental maturity,” “of benefit to the Nation”) are unconstitutionally vague.
• We are highly supportive of compelling circumstances factor for mental health conditions that existed in service. However, VA’s proposed list of mitigating mental health conditions should be broadened and reframed so as not to be used in an exclusionary manner.
• We fervently support the consideration of “sexual abuse/assault” as a mitigating factor. However, the proposal is narrower than VA’s definition of Military Sexual Trauma. VA should broaden this subsection to include sexual harassment as well.  VA should also include Intimate Partner Violence as a mitigating factor.
• VA should include as a mitigating factor whether the service member experienced discrimination in service or was discharged for pre-textual reasons, whether that discrimination was on the basis of race, sexual orientation, gender or gender identity, national origin or otherwise.

Bart Stichman of NVLSP concluded, “While we appreciate VA’s effort to clarify regulatory bars to benefits based on character of discharge, VA’s proposal for doing so is unlawful, contrary to Congressional intent and would leave countless veterans unserved as a result of bad policy decisions.”

About Swords to Plowshares
Founded in 1974 by veterans, Swords to Plowshares is a community-based not-for-profit 501(c)(3) organization that provides needs assessment and case management, employment and training, housing, and legal assistance to approximately 3,000 veterans in the San Francisco Bay Area each year. Swords to Plowshares promotes and protects the rights of veterans through advocacy, public education, and partnerships with local, state, and national entities.

About NVLSP
The National Veterans Legal Services Program (NVLSP) is an independent, nonprofit veterans service organization that has served active duty military personnel and veterans since 1981. NVLSP strives to ensure that our nation honors its commitment to its 22 million veterans and active duty personnel by ensuring they have the benefits they have earned through their service to our country. NVLSP has represented veterans in lawsuits that compelled enforcement of the law where the VA or other military services denied benefits to veterans in violation of the law.  NVLSP’s success in these lawsuits has resulted in more than $5.2 billion dollars being awarded in disability, death and medical benefits to hundreds of thousands of veterans and their survivors. NVLSP offers training for attorneys and other advocates; connects veterans and active duty personnel with pro bono legal help when seeking disability benefits; publishes the nation's definitive guide on veteran benefits; and represents and litigates for veterans and their families before the VA, military discharge review agencies and federal courts. For more information, go to www.nvlsp.org. 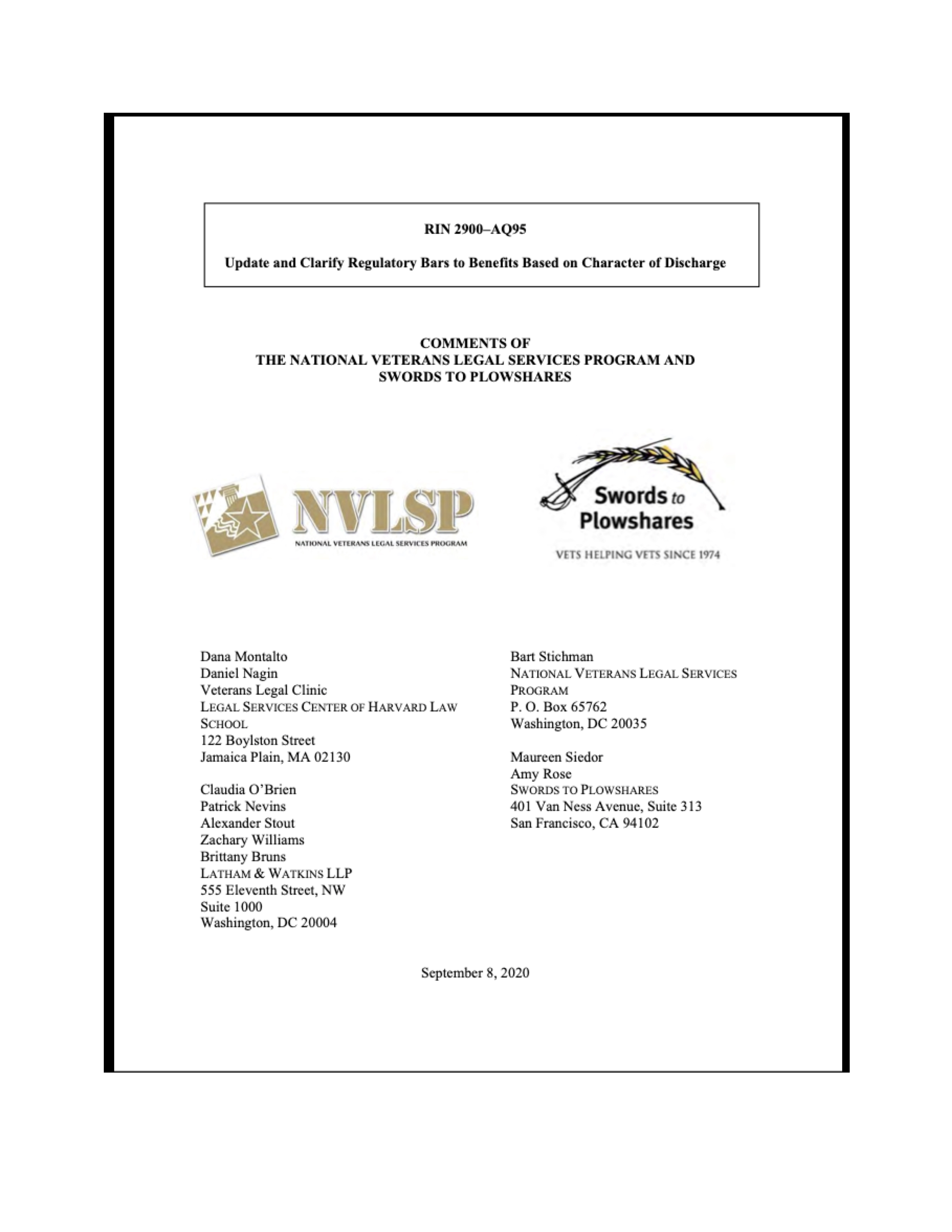